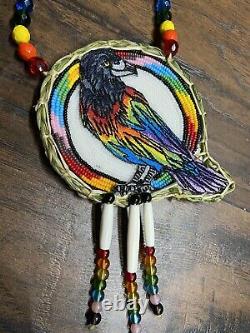 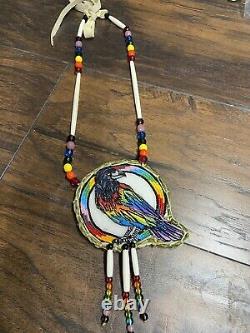 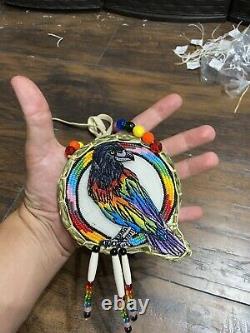 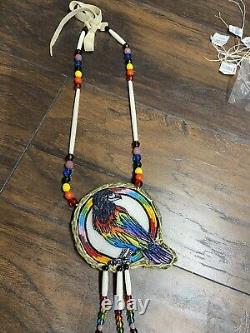 Last picture in this listing is a photo of the actual artist. TRIBAL AFFILIATION: Aniyunwiya Tsalagi (Cherokee). Your item comes with Certificate of Native American Made/Celtic Made Authenticity. I also donated items to various prisons to help fund their Native American programs and help those who can not help themselves. Inedible meat is donated to zoos and local raptor rehab facilities.

I also carry real wolf, mountain lion and bear items on my direct website but they're not allowed for sale through this venue. 4 x 4 medallion with a sweetgrass border 11 cut and size 10 seed beads this is the item you will get.

The crow is again a custom made patch I had designed specifically to be used for my bead work. Custom work and color options available at request there will be some slight variations.

A portion of Rainbow Crow medallion sales will go to various Two-Spirit societies around Turtle island. The legend of Rainbow Crow. The Rainbow Crow was beautiful to hear and to see, back in the days when it never got cold, back in the Ancient Days, before Snow Spirit appeared in the World. When the Snow Spirit did appear, all the people and animals were freezing and a messenger was selected to go up to kijilamuh ka'ong, The Creator Who Creates By Thinking What Will Be. The messenger was to ask The Creator to think of the World as being warm again so that they would not all freeze to death.

Rainbow Crow was chosen to go and he flew upward for three days. He got the Creator's attention by singing beautifully, but even though he begged the Creator to make it warm again, the Creator said He could not, because He had thought of Cold and He could not unthink it. But He did think of Fire, a thing that could warm the creatures even when it was cold. And so He poked a stick into the Sun until it was burning, and the gave it to Rainbow Crow to carry back to earth for the creatures.

The Creator told Rainbow Crow to hurry before it burned all up. Rainbow Crow dove down and flew as fast as he could go.

The burning stick charred all of his beautiful feathers until they were black and since he was carrying the stick in his beak, he breathed the smoke and heat until his voice was hoarse. And so the Rainbow Crow was black and had an unpleasant cawing voice forever after, but all the creatures honored him, for he had brought Tindeh, fire, for everyone to use. The Crow is to this day, still honored by hunters and animals, who never kill it for food. And, if you look closely at the Crow's black feathers you can still see many colors gleaming in the black.

Leather used comes from Mule deer or. Bone/horn beads on this item are made from domestic raised buffalo: Bubalus bubalis.

I do not use endangered species on my items. This item is in the category "Collectibles\Cultures & Ethnicities\Native American: US\1935-Now\Beads & Beadwork".

The seller is "ashortmouse" and is located in this country: US. This item can be shipped worldwide.